From punch cards and the worldwide web

Digital transformation is not just a topic of the present, on the contrary. The roots lie much earlier, also at Dr. Oetker. Come with us on a journey through the company's history and find out how computers & co. came to Dr. Oetker. 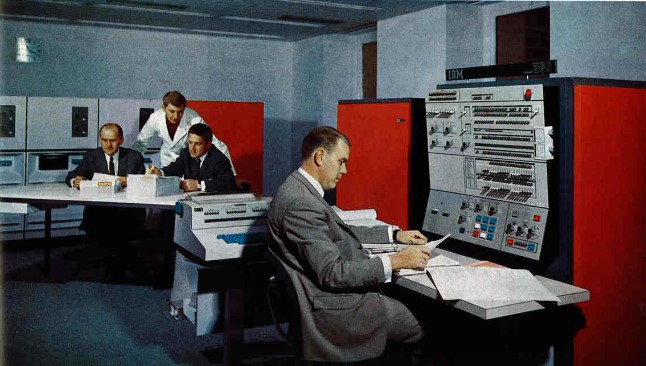 In the Dr. Oetker accounting department between 1906 and 1925: open-plan offices, co working or shared spaces are not modern inventions. Of course, IT did not play a role in everyday working life back then.

The first computers available on the market were extremely expensive and took up a lot of space. In addition, the right infrastructure and, of course, specially trained staff were required. Even for a large company like Dr. Oetker, it made no sense to purchase computer technology in the early days of the computer era. In 1959, this changed: The IBM 1401 computer developed to a kind of “Volkswagen” of the computer world. Admittedly not for private users, but for companies that wanted to get into EDP (electronic data processing) at a reasonable price. The computer was based on transistor technology and was primarily intended to replace the tabulating machines that had prevailed up to that time, and worked with presorted punched cards.

This same IBM 1401 was the first computer installed at Dr. Oetker in 1964. The place of operation was the punch card department in Brackwede. The overall system consisted of the central unit, a so-called card sensing and punching unit, a printer and a ­memory extension. Per hour, 48,000 punch cards could be read and 15,000 written. At that time, a significant upswing compared to the old machines.

Lifelong learning as early as the 1960s

The superiority of EDP quickly became apparent in day-to-day business, too. By 1967, the performance of internal data processing had already increased thirty fold. IT had now become part of in-company training. If, for example, an employee took up a position in data processing in 1958, he or she would have to undergo a total of one year of additional training at Dr. Oetker by 1967 in order to keep pace with development. Lifelong learning is by no means just a contemporary concept. While tasks disappeared on the one hand, new highly qualified jobs such as data typist, operator, system analyst or programmer were created at Dr. Oetker on the other.

EDP was the future, the pace of development increased rapidly. No large modern company in the 1960s could do without it. At Dr. Oetker, the third generation of the IT age was heralded in 1967 with the new data center. The mainframe computer IBM 360 / 40 was to increase the efficiency further. The first operational data center was built on 230 square meters in Building 9, which is still home to our IT department today. This was noted beyond Bielefeld, WDR (short for “Westdeutscher Rundfunk” = Western German Broadcasting) reported on it and the German head of IBM came in person to hand over the system to Rudolf-August Oetker.

1990: Participants in one of the first SAP training courses in the IT learning center specially set up for this purpose.

The next evolutionary stage of digitalization was taken with the IBM PC– the “personal computer”. In the 1980s, these small, handy and relatively inexpensive systems appeared in the company. In 1986, however, only 20 of these computers were in use. Then in 1990, another important step was taken. With the first program package from SAP, a completely new era began for the administration and control of day-to-day processes in the company. With the software, it was now possible to interact with a user interface directly on the screen. New capacities were created for training employees, such as a learning center. In 1998, the installation of the software Lotus Notes in the company began on a large scale. For many employees it brought a completely new function: email.

The Internet: Welcome to the cyberspace!

Screenshots of the first Dr. Oetker website in 1996. It offered the typical features of a website of the 90s and functions such as "Telebacken" or digital postcards from Frau Renate!

In the 1990s, the Internet was still an exotic place; there was talk of cyberspace or the information superhighway. Only a few specialists and enthusiasts were active here at the beginning of the decade, for example in so-called newsgroups, forerunners of today’s Internet forums. For the majority of society, the Internet was actually still completely “unchartered territory”. However, this should slowly change with the advent of the World Wide Web. The Internet became more tangible, more pleasant and, above all, easier to use. What is now understood as user experience (UX) was given much higher priority.

The internet advances to a permanent fixture

With the WWW, the Internet also became interesting for addressing customers, which prompted many companies to set up Internet sites in the mid-1990s. Dr.Oetker started its first website in 1996. Here visitors could find out about products, get inspiration for recipes in “Frau Renate’s consulting hours”, immerse themselves in the company’s history with the “time machine” or take part in “telebaking”. Not to forget, customers could write an email to the consumer service at oetker@t-online.de. Since the late 2000s, Dr. Oetker flanks its international websites with social media activities.