Baking Powder and Harbour Atmosphere – Dr. Oetker in the City of Hamburg

What do we associate with Hamburg? Fish sandwiches, the Reeperbahn and, above all, of course, the harbour. For a long time, however, Dr. Oetker has also been typical of the city on the Elbe. Between 1924 and 1969, two factories produced baking powder, pudding powder and cornstarch in the cosmopolitan Hanseatic city. 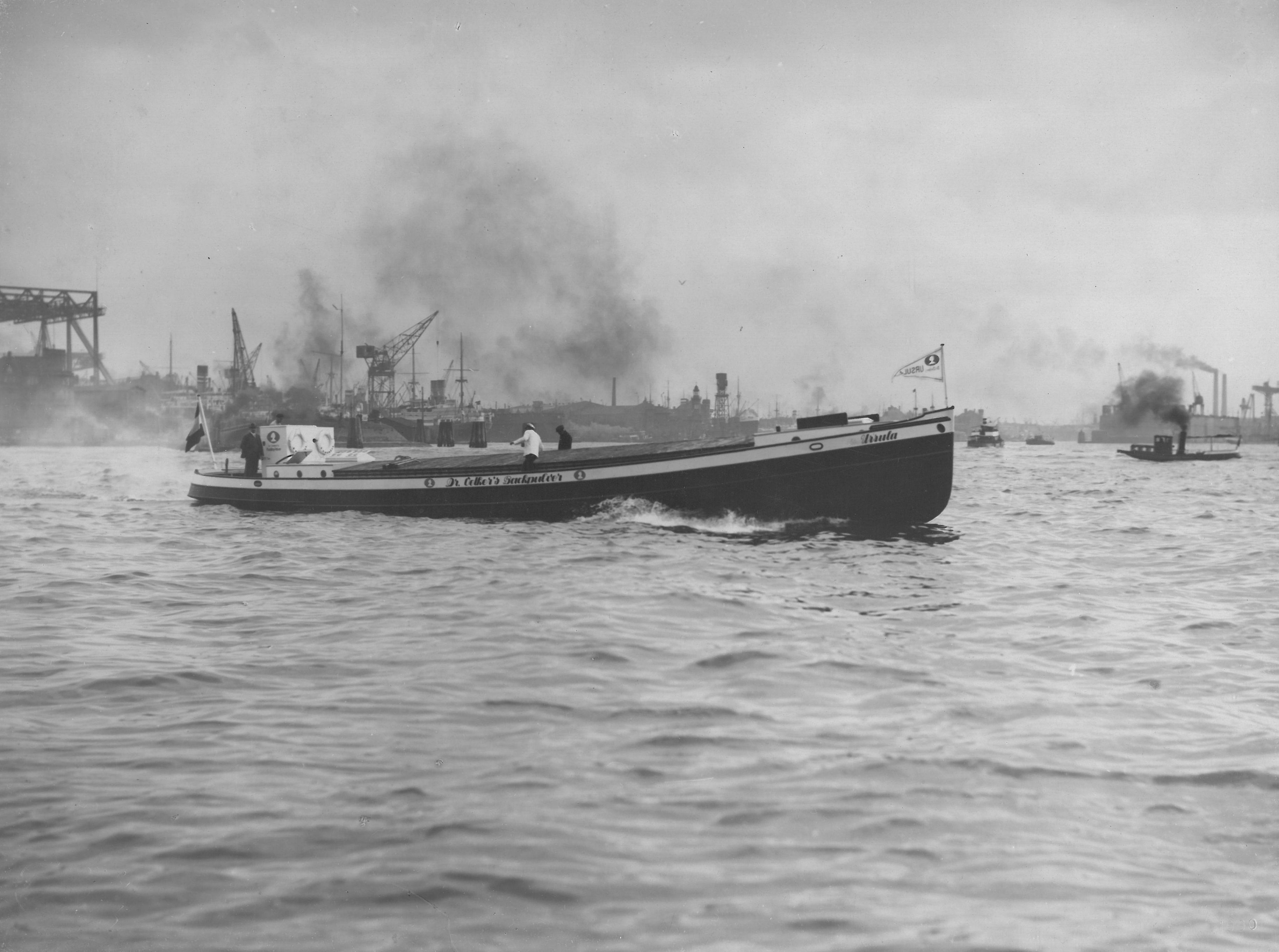 The first Dr. Oetker factory in what is now Hamburg-Altona is founded on 1 May 1924. Until 1937 the city of Altona was still independent. The new production site is intended to relieve the main factory in Bielefeld and shorten transport routes abroad. But this is not the first connection between the Oetker family and the Hanseatic city.

A Helping Hand from the Family

The brother of the company's founder Louis Carl Oetker founded a marzipan factory in Altona in 1870. He dies in 1884 and his nephew Albert Oetker takes over the business. The company name is retained because it is well established in the market. Under Albert's leadership, the business develops into the world's largest marzipan factory. In the 1920s, marmalade production is started under the "Dompfaff" brand. The end of the factory in Altona comes in the post-war period. To this day, the impressive chimney of the factory still characterises the neighbourhood in Altona-Bahrenfeld.

Start in a Port Warehouse

Production at the Dr. Oetker factory in Hamburg is initially dependent on the help of relatives in Altona. In the first few weeks, baking powder is filled by hand on the premises of the marzipan factory. In June 1924, the company moves into a converted warehouse on the Große Elbstraße. This not only offers plenty of space, but also direct access to the port and thus to international goods traffic. The factory grows and mechanical automation is introduced quickly. In 1928, the factory is expanded by the purchase of neighbouring buildings. The main sales area is northern and eastern Germany. Around 1930, the company acquires its own boat, the barge "Ursula", named after the granddaughter of the company founder. The boat takes over a large part of the delivery of finished goods to inland and sea-going vessels or to storage sheds in the harbour. Raw goods are also transported.

In the 1930s, those responsible realised that the site in Altona could not be expanded sufficiently. A new factory building is therefore planned. In 1940, a site is acquired on the Grüner Deich in Hamburg-Hammerbrook, and production starts in 1941. But it is not until after the war that the expansion can take place to its full extent. In 1950, a maize starch factory is also set up at the site. Starch is one of the most important raw materials for Dr. Oetker, for example for pudding powder.

Over the years, new facilities are added to the factory again and again. Lifts, conveyor belts and transport bridges are built between the buildings and floors to make it easier to transport the raw and finished products. A parking garage, an asphalted car park, a car wash, a changing room, recreation rooms, a large warehouse and several other projects are built or completed by the early 1960s.

An aerial photograph taken in 1968. One year later Dr. Oetker sold the plant. It is still in operation today producing corn starch.

For economic reasons, however, the site was abandoned at the end of the 1960s. Market conditions had changed rapidly. In 1969, the factory was sold to an outside company. However, the factory is still in operation today and continues to produce starch at the Grüner Deich site.